“The first time I visited the site, I was immediately aware of its uniqueness…there’s the history of the place, which you can see as well as feel. The Cole House is significant not only historically, but also architecturally. Related agricultural buildings also date from the 19th century—all a reminder of the area’s rich agrarian traditions.” - Richard Beard, Architect, FAIA

Like Kisha and Jason Itkin, it was a sense of place that drew Dr. Richard Beverly Cole and his wife Eugenie to purchase the Diamond Mountain property in the late 1800s that became Theorem. The property became a respite from city life for Dr. Cole, a prominent San Francisco surgeon who served as Surgeon General of California. He cherished the mountain site and named it “La Perlita del Monte” (little pearl of the mountain).

Dr. Cole’s career kept him in San Francisco much of the time, but his family lived full-time in the Victorian home they built in 1889 and farmed the land. The Cole family planted crops and orchards, erected barns and a chicken coop, and even built a small schoolhouse—believed to be the first in Napa. Although Dr. Cole died in 1901, his family continued to live on the property until 1958, when the land was sold to the Graeser family. The Graesers planted a 10-acre vineyard in the 1980s and established a bonded winery on the property, opening a new chapter in the estate’s history.

In 2012, Kisha and Jason Itkin—enthralled by the site’s natural beauty and potential for winemaking greatness—acquired the property and founded Theorem Vineyards.

At the time of purchase, the property had fallen into disrepair. The site’s historic buildings were in shambles, and the vineyards were overgrown and deer-ravaged. With a vision for what the property could be, the Itkins set out to achieve the property’s fullest potential. Their first step was to enlist an architect who could appreciate the site’s historic nature and unique geographic features. They found a likeminded partner in famed San Francisco architect Richard Beard, who shared their desire to preserve as many of the property’s 19th-century structures as possible while also creating a cutting edge, site-sensitive winemaking facility for world-class wine production and exceptional visitor experience.

The first phase of construction was the restoration of the historic Cole House and schoolhouse. Both restorations involved peeling back more than a century’s worth of renovations to reveal the original structures. Along the way, reclaimed wood from the project was saved and repurposed. Today, both exteriors appear much as they did in the 1800s, with modern interior spaces creating inviting and comfortable surroundings for the Itkins and their extended family and friends.

Next came construction of the winery itself, which Beard designed with substantial input from Theorem Vineyards’ winemaker Thomas Rivers Brown. The building takes inspiration from the area’s historic agricultural buildings. Inside, the two-story winery is equipped for state of the art, world-class winemaking.

During the design process, meticulous attention was also given to the visitor experience: from the trellis and welcome area, to the soaring and light-filled fermentation room, to the subterranean barrel room where the tasting experience begins, every detail ensures a luxurious and personalized encounter. Carefully curated art, artifacts and other furnishings further enhance a variety of intimate tasting spaces. Additional outdoor areas, including a patio in front of the schoolhouse, at the property’s lookout point, and more, create inviting spots to stop and sip at every turn.

The final element of the initial construction effort was the Long Barn. Originally a chicken coop, the lengthy building was carefully restored and is now used for entertaining Theorem’s visitors. Flanked by flower and vegetable gardens, the Long Barn patio creates an enticing exterior space for wine tasting al fresco. Here, visitors can enjoy expansive views of the surrounding landscape, as well as a dramatic key sculpture which pays homage to the key featured on the winery’s flagship estate bottling—Voir Dire.

With all major buildings restored and the winery completed, Theorem Vineyards officially opened its doors to the public on September 15th, 2018. Coinciding with the opening, the winery also launched its hospitality program offering tastings and tours featuring fine wines and magnificent vistas. Limited to just a few people at a time, visitors can enjoy a singular wine tasting experience that is both intimate and nuanced. Visits are by appointment only.

The winery’s newest construction project is the rebuilding of a historic dairy barn dating back to the original owners. Occupying the same footprint as the original mid-19th century structure, the new barn will complement the property’s other buildings and will feature salvaged first-growth Redwood planks. With the completion of the new barn anticipated for 2021, the space will provide another distinctive tasting area for winery visitors.

Alongside construction efforts, the rehabilitation and restoration of Theorem’s Diamond Mountain estate vineyard was paramount to establishing Theorem Vineyards. The Itkins have always believed that great grapes make great wine. To make sure that they had the best-of-the-best, they turned to two of the most talented people in the wine industry: Winemaker Thomas Rivers Brown and Viticulturist Josh Clark. Starting with the very first vintage in 2012, the two men went to work. They redeveloped and replanted several vineyard blocks, but chose to keep one old-vine block of Cabernet Sauvignon where they discovered some exceptional, high-quality fruit. That decision proved to be the right one—the grapes were transformed into an otherworldly wine, and the old-vine block today remains the prized fruit source for the winery’s flagship Cabernet, Voir Dire.

The vineyard restoration project continued with the planting of the 2+-acre Hawk’s Prey Cabernet Sauvignon block in 2014. For this special plot, Rivers Brown and Clark planted the Jenkins clone of Cabernet. Descended from Chateau Latour in France’s famed Bordeaux winegrowing region, the clone comes from a family of vines producing multiple, top-rated wines. The resulting wine is elegant, complex and beautifully integrated—reflecting both its Bordeaux-to-Napa pedigree and its high-elevation Diamond Mountain terroir.

In 2016, replanting efforts continued with the vineyard known simply as the “Rocky Block” due to the numerous massive rocks (remnants of prehistoric volcanic activity) 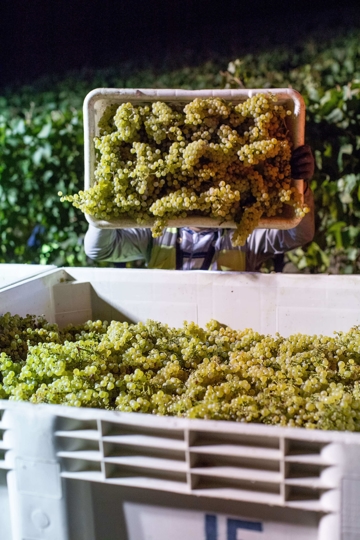 found there. To prepare the vineyard for planting, Rivers Brown and Clark brought in a rock crusher to break the rocks into smaller pieces, which were then tilled back into the soil. The rocky soils force vine roots to dig deep for water and nutrients -- yielding a bigger-style Cabernet Sauvignon with intense color, great aromatics, bold flavors, and impressive tannic structure.

The Itkins have a particular passion for mountain fruit. They also love producing wines that they themselves love to drink. Given their initial success on Diamond Mountain, the Itkins wanted more: in addition to the expressive, high-elevation reds from their home vineyard, they sought another mountainous site for producing crisp, high-acid white wines and other distinctive varietals.

Their search culminated with the purchase of a 34-acre property straddling Napa and Sonoma Counties on Moon Mountain. Perched at 1,800 feet of elevation, with ideal volcanic soils and ample sunlight, the vineyard enjoys cooling breezes from the San Pablo Bay and the Pacific Ocean. From this specific microclimate, they are currently producing two vibrant whites: the Theorem Vineyards Moon Mountain Chardonnay and Sauvignon Blanc. High-elevation wine aficionados can also look forward to future vintages of other varietal wines from this exceptional estate vineyard, including: Theorem Vineyards Moon Mountain Syrah, Cabernet Sauvignon, and a Grenache/Syrah/Mourvedre blend.